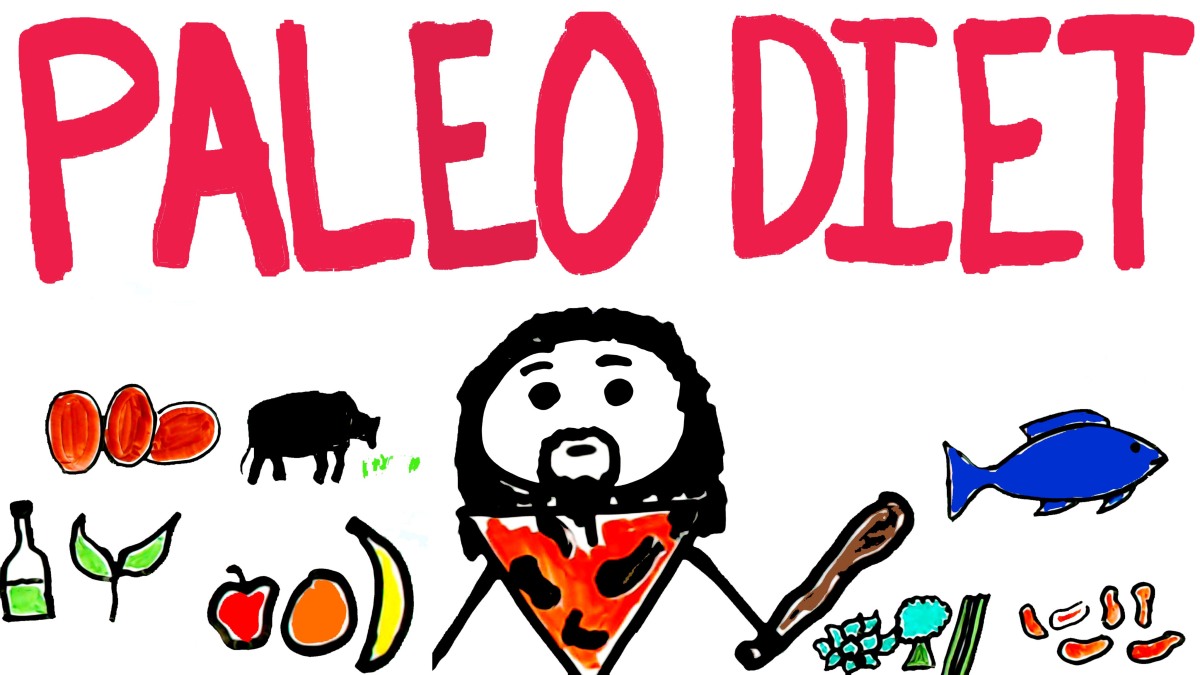 The Paleolithic (Paleo) diet has become incredibly popular over the past decade. I even tried it myself for about a year. The enthusiastic supporters and wild claims surrounding this diet are similar to what we see in the vegan diet. Just in case you’ve been living under a rock (or have never entered a CrossFit gym), here is a brief description of the Paleo diet.

The idea is to eat things that would have been available to cave men, before agriculture. This would include meat, seafood, vegetables, fruits, eggs, nuts and seeds. It would exclude grains, legumes, dairy, refined sugars and oils, and all processed foods. Some versions of the diet include potatoes, whole unpasteurized dairy, saturated fats, organ meats, salt, red wine, and very dark chocolate, while others do not.

The best way to achieve optimal nutrition and prevent/reverse markers of metabolic syndrome is to eat a Paleo diet consisting of meat, seafood, vegetables, fruits, eggs, nuts, and seeds.

Dr. Loren Cordain is considered to be the founder of the “Paleo movement”. He has authored many peer reviewed articles and written several popular books over the past few decades promoting the diet. Other popular Paleo experts include: Robb Wolf (author of The Paleo Solution and credited for popularizing the Paleo diet through the CrossFit community), Mark Sission (author of The Primal Blueprint and website Mark’s Daily Apple), Gary Taubes (author of Good Calories, Bad Calories and Why We Get Fat), Dave Asprey (of Bulletproof Coffee), David Perlmutter (author of Wheat Belly), Melissa Hartwig (of Whole30), and Diane Sanfilippo (author of Practical Paleo).

These and other supporters of the diet say you can eat Paleo foods until you’re full without counting calories and you’ll lose weight, build muscle, and reduce or eliminate markers of metabolic syndrome. They also postulate that many humans are gluten and lactose intolerant. They think eating gluten/grains causes leaky gut and inflammation while dairy products cause allergies, digestive problems, inflammation and autoimmune diseases. They say that with the Paleo diet, the body learns to fuel itself with fat more efficiently and that fat is a better source of energy because it keeps you feeling full longer and prevents energy crashes. Some make even more extreme claims such as that variations of the diet cure autism, autoimmune conditions, and mental illness.

For the purpose of this blog, I will focus on the more traditional Paleo diet which focuses on lean meats, fish, vegetables, fruits, eggs, nuts and seeds; and the claim that eating this way will reduce or prevent metabolic syndrome.

Does the Paleo diet work better than the Vegan diet for weight loss, diabetes, and heart disease?

Are there some variations of the diet that are better than others?

Interpretation: Researchers studied 24 patients with type 2 diabetes. 14 ate a Paleo diet and 10 ate the American Diabetes Association (ADA) diet for 14 days. Both groups had improved metabolic profiles. The Paleo group did better in terms of glucose control and cholesterol.

2.  Favourable effects of consuming a Palaeolithic-type diet on characteristics of the metabolic syndrome: a randomized controlled pilot-study. (2014) https://www.ncbi.nlm.nih.gov/pubmed/25304296

Interpretation: Researchers studied 34 people with at least two characteristics of metabolic syndrome. 18 were assigned to the Paleo group and 14 to the healthy reference diet. 32 people completed the study for 2 weeks. The Paleo group had lower blood pressure, lower total cholesterol, lower triglycerides, and higher HDL than the reference group. No changes were observed for intestinal permeability, inflammation, and salivary cortisol.

Interpretation: 4 randomized control trials with a total of 159 participants were reviewed to determine whether a Paleo diet improved metabolic syndrome better than a typical healthy diet. The diets were tested for between 1 week and 3 months. Overall, the Paleo diet improved waist circumference, blood pressure, triglycerides, HDL cholesterol and fasting blood pressure (all measures) better than the typical healthy diet.

Interpretation: 39 healthy women were studied. 22 ate a Paleo diet and 17 ate the recommended Australian healthy diet for 4 weeks. There were no differences in cardiovascular or metabolic markers between the groups at the end of the study.

What We Know and Don’t Know

These studies certainly have their limitations. They have few participants and they study changes over short durations. However, the findings are very consistent. For people with markers of metabolic syndrome, the Paleo diet works better than the recommended healthy diet to improve their condition.

Interestingly, we found the same results with the Vegan diet. It seems that both the Paleo diet AND the Vegan diet are better choices than the ADA diet (commonly recommended healthy diet) to control metabolic syndrome. This finding led me to wonder what exactly the ADA diet consists of.

Their website recommends meals that consist of non-starchy vegetables on half your plate and lean meats and whole grains on the other half. They encourage consumption of beans, dark leafy greens, citrus fruits, berries, sweet potatoes, nuts, fish, low fat milk, and yogurt. They discourage consumption of saturated fats, foods high in cholesterol, alcohol, refined grains, and sugar. In short, the ADA diet is the perfect combination of everything included in the Vegan and Paleo diets with the addition of low fat dairy.

This leaves us with another whole list of questions. Is dairy the culprit for metabolic disease? Are there studies directly comparing Paleo and Vegan diets? Is the success of these diets simply reflecting that people lose more weight and improve their health by cutting out more things from their diets? Should some people cut everything from their diets except for the foods represented by both the Vegan AND Paleo diets?

There was one study from the group above that had different results from the rest. Study number 4 was the only one that found no significant differences between participants who ate a Paleo diet and participants who ate the standard healthy diet. This study was also the only one to use healthy participants rather than people with metabolic syndrome. Additionally, the study only used women while the other studies included both men and women (although a few were primarily women). This study may suggest that different populations benefit differently from the diets.

Also, I’d like more information on which diets might be best for specific populations. I’m a young healthy woman who likes to lift weights. I may not need to be eating the same way as an older overweight, sedentary man. Or, maybe I do.

For now, I won’t be making any changes. Eat food. Mostly plants. Not too much.